There was an event called Fashionmusicality done by Majesty Loft, a great place in Newark that I've mentioned before. The City of Newark had left it to the Loft's owners to handle this new and different addition to their annual African-American Heritage Festival. Everything seemed like it was going swimmingly, and we took promo shots for the showcase. Below is one of those shots that didn't get used (as far as I know).

I'm not even gonna get into how odd this shoot was for me. I think I freaked the guys on the right out. It was fun, though.
Unfortunately, Fashionmusicality was fraught with challenges, and not everyone got to perform as scheduled. I firmly believe this was because of sabotage, owing to the fact that some probably didn't want it to be successful, and I'm not the only one who saw it that way.
Months later, their Second Annual House Music Festival goes on seemingly without incident. Which just figures: Newark loves its house, because that is familiar to them. God forbid something different should happen around here.

Posted by ThaGataNegrra:[redacted because petty people] at 10:35 AM No comments:

Not really. I've actually been kinda busy.
Between trying to save my brand, stay afloat, help run a small label, do a gig here and there, fight off haters, raise cubs, nurture b/f, and find a new dancer...plus write new material and cast for a video, it's been pretty hectic.
I'm sure there's folx out there that were really REALLY hoping I would just fall off the face of the earth, or had actually fallen off the face of the earth. But, frankly--and in the case of a few particular people, I mean this--where, then, would they be? I'm sure they don't know. Besides, people are starting to see the pattern...
Anyway... 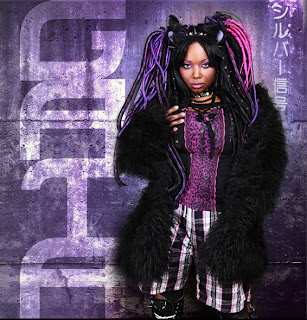 GATA City is being re-released next month. Funny how it's a year later and we're still trying to break this to the masses. Hopefully, our deal with Brainmuscle Media will be successful. I have heard anything from "Why isn't this on the radio?" to "This deserves to be heard!" Well, let's hope.
I'm in the process of casting for my first video. I can't wait to start shooting. It should be fun.

We have finally found a new dancer. His name's 3D. He reminds us a tonne of the last guy, but he's got waaayyyy more humility and respect going on in his favour so far.

I was working on a manga I really wanted to release along with the CD last year, but got distracted by life, as per usual. I've begun working on it again in earnest, so hopefully I'll have something going there soon.

I also have been working on The Alliance a lot, too, trying to get that up and going, still looking for crazy folx. We have more musical artists than visual or dancers, but I'm hoping that will indeed change and we can become a bit more structured. Right now it's a loose alliance than anything else. But everyone is game. There's nothing else out there like it as far as I know, w/the exceptions of maybe the Afro-punk movement and the Black Rock Coalition. Of course, they're more regimented and structured. We're not big enough to worry about that just yet.

I had quite a few gigs, nothing like, gargantuan (I so rarely get to use that word in a sentence, LOL), but nonetheless fun! I loved performing at the BareNaked Bake Sale event. They are such a fun crowd. They accepted me in all my Cheshire Cat glory.

Posted by ThaGataNegrra:[redacted because petty people] at 2:08 PM