For s&gs, I'm just gonna share some pics from either stuff in my life, or things I just wanna share with you. I think I'll start with one of my faves: 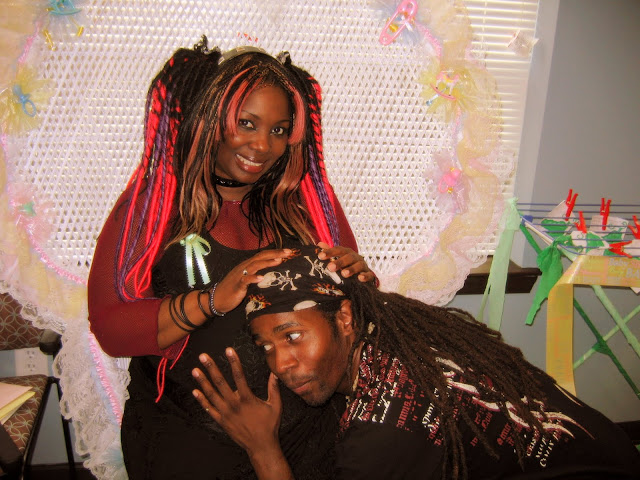 This is Peace (one of my dancers, and the love of my life--for REAL) with me at my baby shower, obviously. This picture always makes me smile...and the day was so nice. It was definitely one of the happier moments of my life, period, and a big reason why I do what I do.
I am truly blessed.
Posted by ThaGataNegrra:[redacted because petty people] at 6:31 PM No comments:

In the present tense, it would seem as if a heroine can seldom be found within the realms of Pop music. By Pop music, I am talking about music that is dominated by a sensual female voice and the contemporary beats accompanying …not simply music which has dominated the airwaves because of its popularity on the mainstream circuit. At least in comparison with its reincarnations in past decades and the female performers who helped to shape the genre then, the new wave of female-fronted pop music has descended from a status of undeniably venerable to almost passable. Nowadays, a great majority of pop music is an indecipherable heap of uninspired radio-friendly tunes and watered down experiences, which emphasizes the baser sides of femininity; favoring materialism dressed up as strength, confidence, and self-dependence.

In the recent past, however, the genre has seen classic songs such as TLC’s “Unpretty”, which digressed feelings of self acceptance of inner beauty, and their equally praiseworthy “No Scrubs”, which emphasized the female empowerment of not letting any man, especially one that is disrespectful and without aspiration, into one’s life. Pop music has also seen the likes of Jennifer Lopez, who boasted favoring honesty and truth in a relationship in songs such as “If You Had My Love”. Pink’s “Most Girls”, a first-person narrative of wanting “real love” as opposed to the superficial qualities of desiring a cash cow, also breathed new life into the lungs of a genre which, more often than not, reverts back to its original form as an industry which is more body- than substance-conscious.

In the wake of a genre that is seemingly dead, except, perhaps, for the few positive veterans of the scene, there is a new solo artist emerging from the Underground.

At first glance, ThaGataNegrra-- or “The Black Cat”-- is a visual anomaly of epic, eye candy proportions. With an album cover featuring a songstress donning purple and pink synthetic loc extensions, a leopard print top, and plaid shorts, Gata Negrra is every bit as cartoonish as an anime character, and yet still manages an intimidating and serious aura that ushers “street cred”, even behind faux cat ears. The reason for the myriad use of cats is simple: they are both her totem animal and stage persona.

On GATA City, the debut album from ThaGataNegrra, dance is used as a synonym of both love and lust: with lyrics inspired by a current relationship, Gata does well to avoid gratuitous oversexualization on songs such as “I Feel You”, with its infectious blend of disco meets New Wave meets Freestyle vibe.

But the Black Cat has a lot more than the metaphorical dance floor anthem to offer up on the album. “Paperdollz” is a personal track dedicated to not changing one’s self to meet the status quo of what men desire or expect.

In an interview, ThaGataNegrra said that though she will be focusing on more personal experiences in the future, a large part of the music-making process is about having fun. But if there were one mission statement she had, one truth she was setting out to prove, it is that “Hip-hop doesn’t have to fit into a stereotypical mold…[It] doesn’t have to be gimmicky, or negative, or materialistic. It’s not about what you have or want the world to think you have…but about being you. And if someone can identify with that, that’s awesome. Whilst dancing, even more so.”

Other than being her totem animal and stage persona, ThaGataNegrra also has an affinity with the feline because their personalities are similar. Like a cat, she says she always lands on her feet. “Sometimes, I feel like: ‘Don’t corner me.’ And sometimes I feel shy and run for cover. But other [times], I'm growling my truth”.

Praxilla is a writer for the Offering, a Metal magazine offering exposure to underground/underrepresented bands of the music scene.
http://www.facebook.com/profile.php?id=1261509068
Posted by ThaGataNegrra:[redacted because petty people] at 4:10 AM No comments:

Sometimes, I get on Twitter and rant away...it is in these moments I have streams of odd consciousness. I think sometimes, it's one of my "people" speaking, LOL...but even if it is, it's always truth.

Here are the last 2, back to back, latest one first. If you are reading this on a spot where I posted it already, apologies for the repeat, NOT what I said.

"Saw a profile where their tagline was "tossing all punk rock bxtches in the ocean" or some such shxt. W'ever that means, cuz I ain't goin'!

"I do what I want...you don't like it? Too effing bad. Cried ONE tear in a bucket--and that's cuz something was in my eye.

"Don't let the look fool you or let the fact my CD's composed mainly of shakeyerass fool you. I told you. I have facets. It don't stop there.

"You can look at me and dismiss me if you want--I will not be denied. Sorry to disappoint you. I've been at it too long to suffer ignorance.

"The dance stuff is just one facet...trust me-- you WILL see more...eventually. You don't go thru what I have w/o developing 'sides'.

"You may not like one as much as the other, but to deny one is to deny all...and you'll just be missing out if you do.

"That said....DEAL WITH IT. I haven't changed for ANYONE and I'm not about to start. Think what you want; keep being wrong.

"Keep thinking it's all gimmick. I might get a little more dolled up for some things over others but this is me all the time, always been.
"You can't fault me for being me. Dislike it, maybe; fault me, no. At least I'm not trying to be someone else, all rumour to the contrary."

"If I can help it, I try not to associate with those who hang with people I'm not trying to be linked to. #negativitytravels #loyaltysdead

"If you notice I seem to NOT be receptive to you...it MIGHT be for that reason. Also, if you managed to dishonour me yerself...hm. #takenote

"So, I'll watch the dog and PHONY show with great amusement as it commences. If you take offence...it's prolly you performing. #checkyourself

"Also done with people who decide I'm a friend when it's convenient for them. How am I good enough for one event, but not another? #dumb

"If you can't accept me as I am ALL of the time, we don't need to talk anymore. #ihavenotolerance for intolerance. Do I embarrass you? #good

"If you can't be bothered to enact common courtesy procedures and leave people hanging @ critical times, we don't need to talk anymore. #bye

"Don't say you'll be @ an event/you'll help and string me, or worse yet: not have the love to answer/own up, and expect I'll forgive. #NO

"Moreover, don't expect I'll welcome anything you say to me with open arms if you consort w/enemies and get "tagged out there"...#notstupid

"I'm done with being treated like shxt by those who say they "love" me. I embrace those who know what it is to stand by a person.

"DO NOT ASSUME I AM HAPPY TO SEE YOU GIVE A FXCK ABOUT MY SMALL VICTORY. DO NOT THINK THAT MAKES US CULE. If anything, it makes you look sad.

"Upside, tho': it makes me LMMFAO. HAHAHAHAHAHA

"So no, that doesn't make me a bxtch nor does it imply any kind of conceit or forgetfulness of whence I came. It does, however, liberate me.

"I'm just saying...former friends-who-still-think-they-are-after-that-bullshxt: I. See. You. And no, not in the Na'vi way. This ain't AVATAR.

"Thank you, though, for all the knives in my back. To paraphrase one of my "rants": you've just given me a more fortified backbone. #stronger"
Posted by ThaGataNegrra:[redacted because petty people] at 8:10 AM No comments: 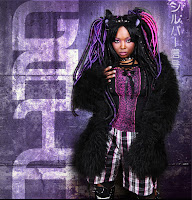 Yeh, you 'eard right-- GATA City is now available for preorders on Bandcamp! The digital version includes a little something extra, and there's also an option to order a physical CD, should you want one. I'll be offering a package later that includes an exclusive t-shirt that you'll only be able to get thru a Bandcamp purchase!
Pre-order your copy here. Full release is 8-24-11!
Posted by ThaGataNegrra:[redacted because petty people] at 6:23 PM No comments: