Well, we FINALLY did the video, and I must say, everything up until that day was so fxcking stressful. I could not believe our bad fortune. But, here at Tha Cat Lair, one thing we do and do well is make a dollar out of fifteen cents. So, we took what we had and made the best of it. I'm not expecting my exact vision, but some semblance of it. Money is a powerful tool...I probably would have had exactly what I wanted if I had a decent budget.
In spite of that, we got to meet some really awesome people, folx I hope to work with again. The director was sort of a geek, like we are, so he knew what I was going for...I trust that he will make it look fun and lighthearted like I wanted it to. I would like to do another version that's all dance, but it's hard to get people together for that. 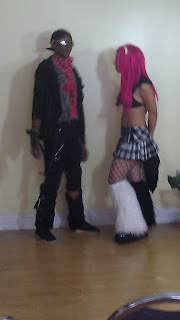 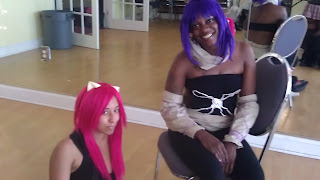 Above are some of those great people I was talking about. We filmed it it two parts; one for the intro and one for the big shoot. Here's me below lounging and dancing and stuff like that there: 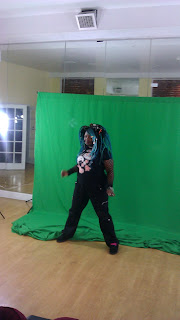 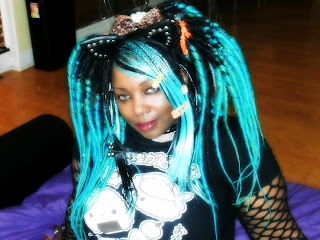 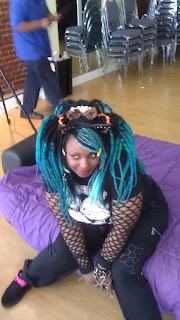 3 Miles was super supportive of the shoot and I was soooooooo grateful for that!

I have two shows in one day, within an hour and some change of each other. I'm nervous, because one is pretty big, and the promoter's rep is on the line (he fought for me and one other artist, AAEHH's Orikl), so I CANNOT SUCK.  I'm trying to not take the fact that they misspelled my name on the site as a bad sign, LOL...MercRetro just hasn't been letting go, has it? Go away! You're supposed to be turning direct!!
The other is less formal and more of a block party, so it should be fun. Last year, the block party was NOT trying to cancel in spite of the fact that Hurricane Irene was bearing down on us. So, that was pretty interesting!

And yes...my freakin' birthday is coming up...AGAIN.....I'm hoping for sushi and dancing and debauchery. Pirate stuff. I'm sure something interesting might happen this year. It can't be boring every year!
Also....I got some messages I really needed to hear...I will heed and keep moving forward...and continue to give two middle fingers to the haters.
Meow-ho-ho!
Posted by ThaGataNegrra:[redacted because petty people] at 6:48 PM No comments: