This week has been a really trying one for meows truly. 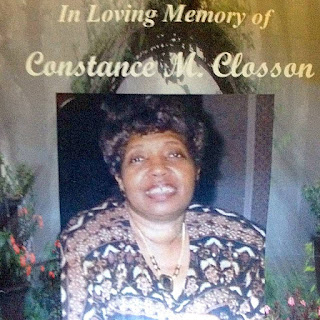 Two years ago, on October 3rd, my maternal aunt, Caroline, died of cancer. Last week, I buried my other maternal aunt, Constance…who also succumbed to cancer—uterine this time. I’ve never had to help plan a funeral before, and needless to say it was emotionally trying. It was also exhausting in that we had to see that her affairs were in order; thankfully, her legal affairs and whatnot were (unlike with my other aunt), but cancelling subscriptions, alerting people, and all the other arrangements can indeed take a toll. Dealing with the harsh reality that someone who helped mold you in your early years more than you realised is no longer here…that’s a bit much. And, every death in my immediate family makes me brood on my own mortality, but this hit home even more so due to my abnormal-cells scare.

Also… this leaves my mother, the baby of four children, as the last of her siblings. That, for some reason, breaks my heart. My mother and I haven’t always had the easiest relationship, but I cannot bear that she is the only one left. I have resolved to be there for her more than I have been henceforth. So that is why I’ve barely left my mother’s side for the last few days.

I wrote my aunt’s obituary, and as I was doing that, I remembered all sorts of things that we’d done together when I was a Gatita. She passed along to me the love of musicals, crafting, baking, and got me interested in knitting, sewing, and crocheting. She taught me to appreciate gardening, lavender, and tulips—so much so I insisted on having the latter in her floral arrangements.

I realised that, even though we’d stopped being close in my tweenage years (that is a weird phenomenon in the Closson family; do not ask me why), I really missed those times, and I really missed my Aunt Sissy. I also resolved that I would again take up sewing and knitting, and I would buy tulips every year in her honour. I will also teach my Grrl Cub all about “The Sound of Music” and “The King and I”, which shouldn’t be hard, since she loves singing and dancing.

Even in her last days, she joked… it seemed that she’d begun displaying this wry sense of humour I hadn’t seen in a very long time, telling me that if I was gonna sit and visit her at the nursing home, I was gonna have to deal with “this ugly noise”—she was in considerable pain despite the meds, and moaned a fair bit. She asked me to hold her hand and gently ribbed me about “not rubbing it enough”. From what I understand, all she really wanted at night was for someone to hold her hand whilst she fell asleep. I wish I had been there to do it that one last time.

Okay, now that I have feels all over my feet…I’m gonna add some more.

The last week has also been spent clearing out my aunt’s apartment. I mean, it was a lot of stuff, but not a lot of heavy furniture, thank goodness. We cleared out books, clothes, all sorts of stuff. We finally finished yesterday.

On our way to her apartment, I was riding in the car with my mother, my boyfriend, Peace, and my cousin, Robert. We got to the section of Avon Avenue and Springfield Avenue at the Newark/Irvington border, and Peace spotted a little girl crying and told us, “Whoa—there’s a little girl on the corner by herself crying, and nobody’s around her!” I look around and see the little girl and my heart died. She was hysterical. My mother stopped the car and Peace and Robert got out to get a better look.

“Oh, my God—her mother’s on the ground!” I was already fumbling with my seat belt and on my way out of the car before I got it off good, praying that this woman hadn’t been shot to death on some street corner in front of her child. My mother was going to turn the car around but I didn’t want to wait.

So, we all ran over there, and it was lucky Peace and Robert even saw the mom because the weeds were so thick between the curb and the sidewalk that you couldn’t see her at first glance. We didn’t want to move the mom, as she was facedown on the pavement and I was horrified something really awful had happened to her. I looked at the little girl and thought of my own daughter, and of myself when I was small, and I said to her, “Will you come to me?” She nodded, and came to me so I could pick her up.

I asked her what happened, and she said, “My mami fell.” I told her I was sorry to hear that. I asked her name; she told me, and I told her mine. She told me how old she was—just three. She wasn’t able to tell her address, so I just told her that everything was going to be okay, and that we’d get help for her mother.

Peace, meanwhile, had called 911, and Robert was trying to keep the mother, who had begun stirring, from getting up. I talked to her, too. I asked, “Ma’am? Are you okay?” She didn’t answer, but looked at me blankly. She couldn’t talk, it seemed. So I told her we were getting help and not to move, but she seemed intent on trying to sit up after awhile, and there was no stopping her. So Robert tried propping her up so she wouldn’t fall again.

A Newark bluecoat came down the avenue in his black-and-white, so my mother and I flagged him down and started telling him about what we’d seen, and he called it in to Irvington Police. He’d told us he saw her standing by a nearby fence earlier with her daughter. He said he was glad he drove back through, and that we saw the little girl.

The mother seemed to come around slowly, and asked where her daughter was. I said, “I’ve got her; don’t worry. She’s safe.” The mother said, “Thank you.” I told her: “No worries—I have a daughter too.”

Soon after that, an ambulance or three arrived—the first being the small type. Irvington Police had also arrived, and a lady officer came over, and we all explained what we’d seen and heard, and made sure the mother was safely in the ambulance. The officer asked the EMTs about the little girl, and they seemed at a loss. I said to the girl, “Do you want to go with the nice officer, so she can take you to your mami?” The poor girl looked me in the eye and shook her head.

I almost fell apart right in front of her, bouncing her on my hip. I didn’t know what the hell to do then! It took some coaxing, but we got her to go with the officer, and I asked my mother to give her a stuffed toy from the back of her car. We did, and we said goodbye, and left my card with the officer, asking her to give it to the mother in case she wanted to call or anything.

And THEN I cried, hee.

I really hope the mom was okay. We were really scared for her and her daughter—Peace and I, for sure, cuz we’re too damned sensitive to stuff like this. But my cousin said he thought maybe the mom had a seizure; he remembered what it was like when our grandfather had them and how his mannerisms were when he’d come out of it. I’m still hoping that the mom will call, if but to tell us how she’s doing. That’s all I’m really worried about. We’re still worried as I write this. I can only pray she and her sweet little girl are both fine.

Posted by Tha Gata Negrra at 2:47 AM No comments: