...and I agree.
Here's an excerpt from an article about the VH1 documentary he executive produced, Planet Rock: The Story of Hip-Hop and the Crack Generation (it airs this Sunday night):

On What’s Missing From Hip-Hop
"I want to see some little motherfuckers get together like a Public Enemy and give these fools a wake up call like, 'Fuck this jewelry and cars bullshit,' (say it AGAIN!!--GATA) and bring it back to Armageddon! Don’t get it twisted--the people that are making music now, I’m not mad at them.
People think I’m mad at pop music [but] I’m not. I’m just saying the conscious music is lacking.There’s no roots, really, and when you think about the groups that I name like the PE’s and all that, they can’t make records now because we’re not the right age. We’re the age of their parents. Kids don’t want to listen to their parents, so we accept that so I’m saying there just needs to be some-- how could KRS 1 and all of us used to be so militant at our age. Where are those kids that are gonna come out and really push the envelope? NWA did “Fuck the Police,” we were going hard, we were getting arrested. Now everybody is trying to stay in their nice little safe bubble and I miss the edgy music. That’s all I’m saying. Saying you sell drugs, that’s not edgy to me, let’s talk about some issues. Lupe fiasco does it. I’ve listened to some of his stuff. He’s not afraid but there’s a lack. I would love to be a fan of some new little bad ass cats coming out and letting mother fuckers know what’s up."
I say fxck yer age-- do that shxt anyway. They need to learn from SOMEONE. I guess that's just me.
You can read the whole article here. It also talks about a well-known swagger-jacker Ice calls out...oh, the irony.
Posted by ThaGataNegrra:[redacted because petty people] at 11:17 PM No comments:

If you've heard GATA City, or used the neat little download doohicky at the side of the blog there, or received a download card from me in the street, you've heard the song, "Paperdollz". If not, I'll post it here so you can check it out...I'll wait.

So far, it's looking to be my lead single because it's the one getting all the attention.
I've been doing a lot of thinking about it because it is something personal, and I realise some people might take it the wrong way. So I wanted to post a blog on it.

Some of the descriptions of the girls in print might be taken as inflammatory --"cookie-cutter", referring to said girls as "that" as opposed to "her/them", pointing out their "fake boobs" and "big booty"-- you get the idea. Remember: this is from the POV of an obviously frustrated, neglected woman, who's feeling just a wee bit insecure about her partner's infatuation. She even tries to tell him, "I get it"-- even going so far as to suggest his indulging in his porno fantasies helps their relationship by keeping him faithful ("mainlining those'll/keep you home, I suppose"). The problem lies in him not paying any attention to her whatsoever, and she feels she can't compete even though she is a flesh-and-blood woman.

My own feelings are coming out in that I do take issue with the majority of these girls looking the same...P/shopped to the point their bodies are almost identical: same skin, same boobs...definitely the same big ass, LOL. It's insane. It also kills me that if a girl has that look in real life, the men will complain about the very enhancements that made them buy the magazines and movies in the first place....and then complain they want a "real" girl. Ri-i-i-ght...no pressure there.

The real message is that anyone--not just guys, but women too-- need to appreciate the person in their life and not take them for granted, favouring things that are not real over someone who is. A magazine is just ink, metal, and paper. A flick or an online site is just pixels on a screen. It's two-dimensional. And in the end, your partner is right there, and that image is NOT.

This even extends to the strippers/exotic dancers at the club. They are there to get their money. They are there to entertain you and do their job... up to and including being friendly (in some cases, EXTRA friendly) with you. It doesn't mean they wanna bear your kids or give you any, even. They might not be 2-D, but they usually aren't a part of your life outside of that club or that bachelor/bachelorette party or whatever. They are real people, but they aren't your real relationship. They sell you fantasy.

THAT is what the song is about.

So, no...it's not an animosity thing. Trust me.

Why was I a Paperdoll, you ask? Simple.

"I was young. I needed the money."

I had my own reasons. Besides-- I don't think I'm the first femcee or artist who did this at one time in their life. It was one mag, a loooooooooooooong time ago. Anything I've done since was either pin-up or fetish modelling.

And...trust me on this: the feature sucked because a) it wasn't real and b) my hair was a wreck. Ugh. I have better pics with my kit off in my possession that are waaaay better, LOL.


Posted by ThaGataNegrra:[redacted because petty people] at 5:56 PM No comments: 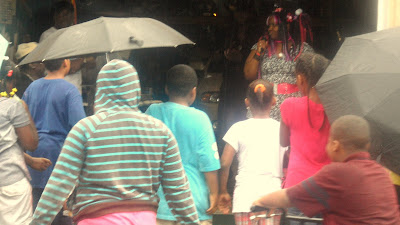 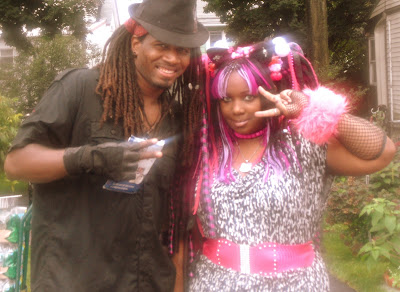 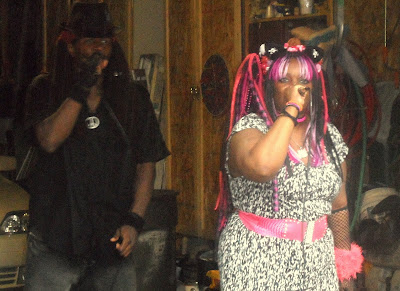 Those are all random shots of our pre-Irene performance at the Palm Street Block Association's annual block party. It was raining like crazy most of the day, but they are hardcore about their block parties, LOL
Posted by ThaGataNegrra:[redacted because petty people] at 12:36 PM No comments: